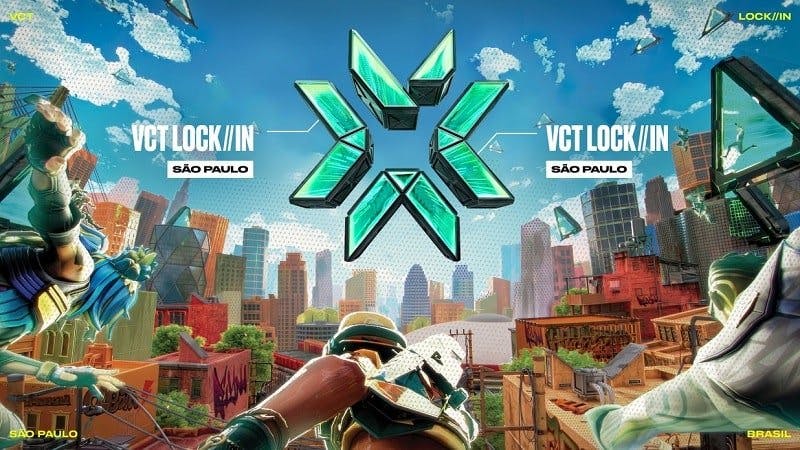 Ahead of the 32-team VCT LOCK//IN 2023 São Paulo, the Strafe Writers Ganesh and Zen sat down to discuss the Alpha and Omega Groups, tournament fixtures and predictions for the event.

It’s time to lock in for the first international event of the #VCT 2023 season! 🔒

Here’s everything you need to know about LOCK//IN Brazil. pic.twitter.com/11hMbHMYFr The VCT LOCK//IN 2023 São Paulo will feature thirty-two teams split into two groups of sixteen. The groups are Alpha and Omega, the teams and rosters for the Alpha group are as follows:

BBL Esports features an All-Turkish lineup. With seasoned Turkish names in Turko, Aslan and Brave, they will come to win the tournament.

Dubbed Clout9, C9 on paper is one of the best teams to come out of the NA rostermania. With yay, Leaf, Xeppa, Zellsis and Vanity as the IGL and mCe as the coach, C9 is a strong contender to win it all.

Detonation has a mix of talent and the original Korean Jett in Seoldam. VCT lock//in will be a good litmus taste for Detonation boys.

EG features some good names in NA. Before franchising, EG were decent, and towards the end of the year, c0m and EG looked great. With BcJ and Ethan, the roster is upgraded and has a good chance to top the group.

One of the Chinese representatives, FPX, has the most to win out of any team in the group. Recently, FPX has been dominating China, and the VCT LOCK//IN will be a great chance for them to put China on the map.

With Meteor as the carry, Gen.G will be a strong team, but the team needs to prove itself on the big stage.

Nukkye and Hoody are at the roster's helm. The giants look great and will be strong contenders in the event. They are strong dark horses and might upset a lot of teams.

Led by the Benrlitom Brothers, Scream and Nivera, Karmine Corp are for sure strong names in the competition. The team already have a good spread of roles, and they might upset many teams.

With Sheydos, Koldamenta, starxo and trexx, KOI will be a strong team, but the team is a mix of players and the team might need time for the gelling with each other.

The world Champions lost Sacy and Pancada, but the core stayed intact, and it is enough reason for the team to make a deeper run and even win the whole event.

MIBR with Bzka will likely be a solid team to beat. With heat, murizz and jzz, the team has strong firepower. The team will be dark horses and might make a deep run.

Featuring the Optic core in FNS, Victor, Crashies and Coach Chet with FPX Ardiis and NRG s0m. NRG have a solid chance to win it all, and they will be one of the two teams qualifying for the playoffs from the Alpha group.

W Gamers will come into the tournament with the same firepower and brains and are the longest-standing teams in Valorant alongside DRX. W gamers are strong contenders not just for playoffs but the whole tournament.

With Patiphan and 2021 Xerxia back, Talon Esports will be a strong team in the Alpha group. The team will have strong challengers, especially in their bracket with DRX, and they have to play thier best to win.

Heretics are one of the best European teams at the event. The team will have to figure out the roles as there are roles that clash. But they will be one of the strongest teams in the group. For the first spots, the favourites will be NRG esports and LOUD. NRG will likely secure the first spot in the Alpha group and start the year strong. A few other contenders for the first spot will be Karmine Corps, Giants Gaming and FunPlus Phoenix.

DRX, Paper Rex and Cloud9 will definitely be the teams in contention for the second spot. DRX will be the strongest team in the tournament and will likely secure the second spot of the Alpha group. As mentioned earlier, Paper Rex, Cloud9 along with Talon, Heretics and EG will be some of the strong contenders.

The Alpha group matches will start on the 13th of February, and it will be exciting to see how the franchised teams play. You can read about the format details, schedule and watch guide here.