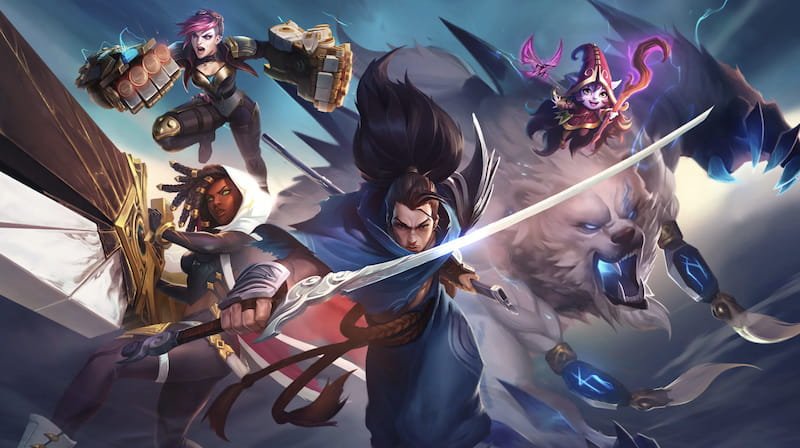 Why is League of Legends so popular?

In the world of Esports, League of Legends is one of the most popular games out there. This can be attributed to its competitive nature and endless playtime.

Plus, it benefits from being one of the first video games to understand and target esports. LoL was one of the first games to put so much focus on Esports. Because of this, many developers nowadays base their format and structure of competitive games on League of Legends.

What is League of Legends?

League of Legends is one of the first MOBA (multiplayer online battle arena) games. You play the role of a legend and team up with four players to battle against an opposing team. The objective is to destroy the other team's base first while fighting battles across the map.

Riot Games built a world that fits the game. The Legends originate from a place called Runeterra, each character with its own distinct culture and regions. The developers have added more depth to the legends and their connections with each other. The in-depth lore of League is one of the main reasons players invest so heavily in the game.

With 140+ champions to choose from, developers periodically modify the game to keep things interesting throughout the seasons. Ranks change every season, and players can work their way up along with the changes. New champions are routinely integrated into the game to add more excitement for the players.

Why is League of Legends so popular?

The main reason for the popularity of LoL is its accessibility. It was one of the first games to use a free-to-play model successfully. The game was released without a price tag. The company instead profited from cosmetics that provided purely aesthetic benefits. This model was used only in MMO games at that time, and was a fringe idea even then.

This led to a huge wave of gamers starting to play LoL as it was free to play. This created a snowball effect as the more people started playing, the more interest in the game increased.

The main reason for its popularity in Esports is the competitive nature of the game. You work with a five-player team against another team in a battle of skill and strategy. Players wanted to reach the highest rank in the game and started grinding their way to the top. But only the very best could achieve this.

League of Legends is extremely fun to play and spectate. Even casual gamers or ex-players still watch their favourite teams compete.

So, answer your question "Why is League of Legends so popular?", in summary, League of Legends benefits from several factors that have led to its rise in popularity, including its accessibility and competitive nature. It also nurtured its relationship with the esports scene from early on.

The most likely cause of its success is the fact that the development team closely observes and listens to the feedback from its fanbase. Its transformation over the years can be attributed to the trials they've done based on feedback from its player base.

According to a tweet by independent reporter Brieuc "LEC Wooloo" Seeger, Korean "League of Legends" botlaner Lee "Prince" Chae-hwan has signed with FlyQuest of the League Championship Series (LCS) for Spring 2023. The 22-year-old garnered acclaim this year as one of the best botlaners in Korea with Liiv SANDBOX from League Champions Korea (LCK). Despite the team's strong play in summer that earned them a 3rd place finish in playoffs, SANDBOX lost two series in the LCK 2022 Regional Finals<span class="read-more">more</span>
3d
James Domizio

Team Liquid of the League Championship Series (LCS) announced their "League of Legends" roster on Dec. 2, promoting two academy players and importing two Korean players for a roster of Summit-Pyosik-Haeri-Yeon-CoreJJ. TL's 2022 roster of Bwipo-Santorin-Bjergsen-Hans sama-CoreJJ was a superteam built for the 2022 League of Legends World Championship, which took place in North America. But the roster didn't mesh as intended, with the team failing to win in spring and summer playoffs — finishing 3rd and 4th — and only<span class="read-more">more</span>
3d
James Domizio

New Chapter for World Champions After the turmoil of the LCK off-season the past few weeks, DRX have now announced their new roster for the 2023 LCK season on the 3rd of Dec. It was reported late last month that DRX’s entire Worlds winning roster was entering Free Agency. Only Cho “Beryl” Geon-hee of the original roster was retained. In the place of the former roster members, DRX have acquired former DRX alum top laner Kim “Rascal” Kwang-hee of KT<span class="read-more">more</span>
3d
Foo Zen-Wen

Team SoloMid (TSM) is catching some recoil after sources revealed their 2023 NA Challengers League roster, formerly known as LCS Academy, comprised of mostly veterans. STACKING SOME VETERANS Sources in touch with investigative journalist LCS Eevee on Twitter, revealed TSM's 2023 NA Challengers League roster. Three veterans being on this team is the main source of frustration for many. Backlash from the community and talent were shared alike. Three names immediately jump out when taking a look at TSM's 2023<span class="read-more">more</span>
4d
Andrew Donovan

The History of Superteams: Are they successful?

With off-season in full swing, many players from the best regions around the world are being shifted around to different teams. Superteams always a chance to be formed during the off-season: are these superteams historically successful living up to expectations? HOW DOES A SUPERTEAM FORM? Typically, a superteam is created an already existing, strong roster. A squad of two to three already established players, with maybe a couple other weaker links can be the foundation of a superteam's beginning. Expectedly,<span class="read-more">more</span>
5d
Andrew Donovan

Massive changes coming to the LEC in 2023: Rebranded to EMEA, Winter Split added

Likely one of the biggest overhauls to League of Legends' competitive scene in Europe, previously known as the LEC, are set to change in 2023. A new split will be added dubbed the Winter Split. Previous "wild-card regions" like Turkey and the CIS, will be integrated into the newly formed League of Legends EMEA Championship. MASSIVE RE-HAUL Starting in 2023, the LEC will be rebranded to the League of Legends EMEA Championship, or LoL EMEA. The EMEA encompasses Europe, the<span class="read-more">more</span>
6d
Andrew Donovan