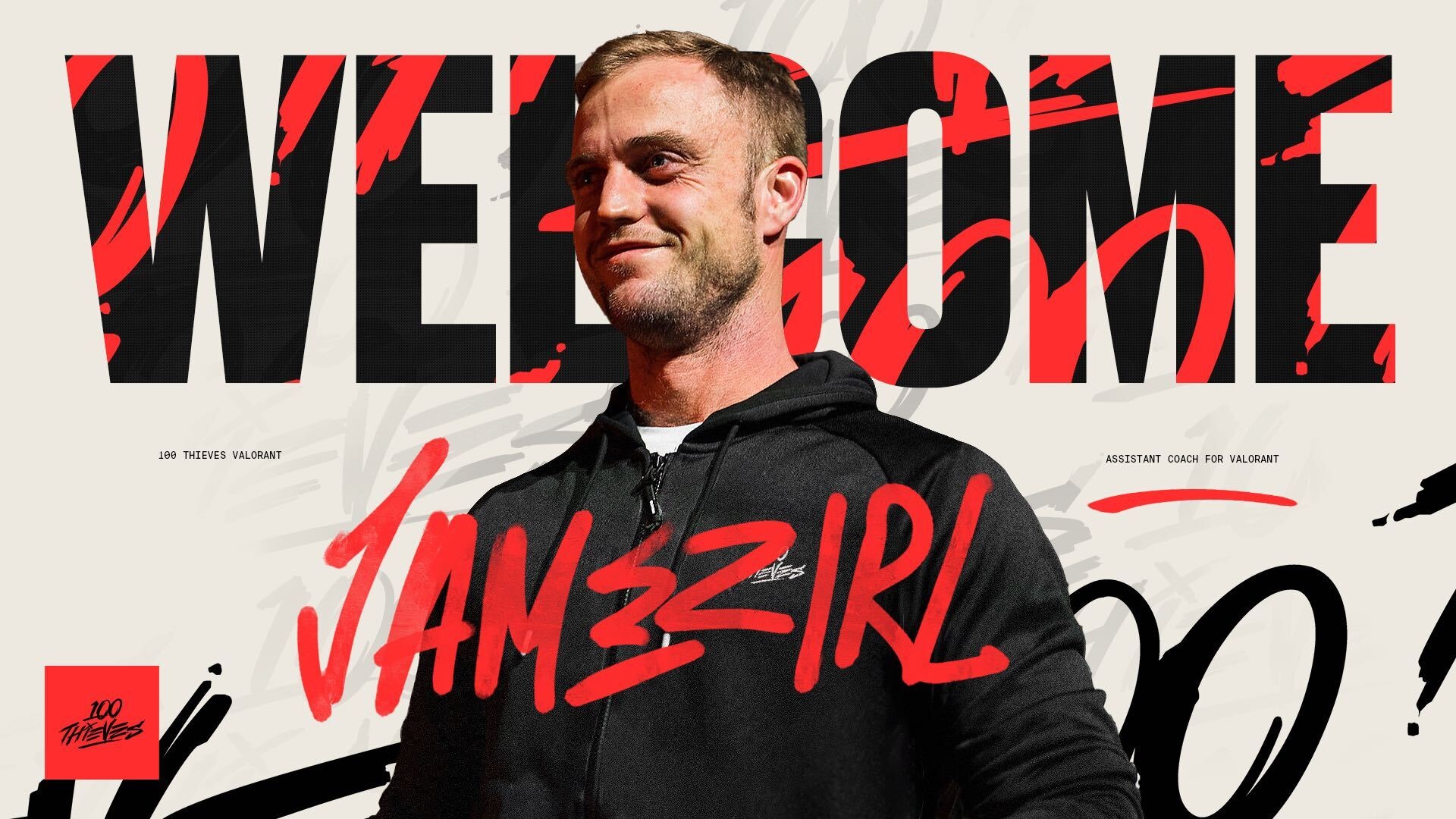 Valorant
14d
Ganesh Jadhav
Ahead of the VCT 2023 Kickoff Tournament, 100 Thieves Valorant bring in ex-Cloud9 Coach James "JamezIRL" Macaulay as the Assistant Coach. After the departure of SeanGares, the head coach for the roster, MikesHD was promoted to the Head Coach position. In the data dump of the Valorant Roster, the most surprising name was JamezIRL under 100 Thieves.

Founded by the ex-COD player turned streamer Nadeshot, 100 Thieves is one of the youngest and largest Organisations in North America and were one of the first organisation to go all in on Valorant. With the roster consisting of Asuna, Hiko, Nitro, Steel, and dicey the team won Valorant First Strike.

The team's next best iteration came recently with Derrek, Asuna, bang, Stellar, and Will, along with Coaches SeanGares and MikesHD. The team made an impressive LCQ run and won the event, getting a ticket to Valorant Champions 2022. At the Valorant Champions 2022, The young team displayed how good they are defeating Fnatic. Fnatic was one of the contenders in the tournament.

They became part of the Valorant Partnership Program and were the first organisation to make a move and officially announce a new member in Cryocells.

Shortly after, Seangares announced he'd be stepping back and staying as a content creator; instead, MikesHD was promoted to Head Coach.

JamezIRL has been a CSGO coach and player who transitioned to Valorant with Cloud9 and has been Cloud9's coach since its inception. During his tenure in Cloud9, JamezIRl helped the team win the VCT NA LCQ 2021 and become one of the best teams in the first half of 2022. But after the departure of Xeta from the roster, the team struggled. Cloud9 let go of JamezIRL on October 4th. James soon joined 100 Thieves. Yesterday they announced the addition of JamezIRL as the assistant coach to the Valorant roster.

Jamez has been in the tactical shooter biz for awhile now, and we’re looking forward to the insight he’ll bring 100 Thieves VALORANT. pic.twitter.com/l2yGSZURME

With JamezIRL in the mix, The complete 100 Thieves VCT 2023 Roster will be:

How many Valorant maps are there?

Riot’s tactical First Person Shooter (FPS) title, Valorant, is now in its second year. Over the course of time, new maps have been added to the pool in a bid to shift gameplay and reinvigorate the player base. Each Valorant map has its own personality and characteristics that define gameplay on that map. There are currently 8 maps total for Valorant, 7 of which are in the active map pool (meaning playable in the Competitive and Unrated game modes). Split<span class="read-more">more</span>
4h
Foo Zen-Wen

Riot has introduced a new gamemode to their tactical FPS title, Valorant, entitled Swiftplay. It is a game mode meant to emulate the core fundamentals of what makes Valorant fun to play while packaging it in a quicker more digestible bite. Valorant is an addictive game there is no doubt on that. Win or lose, the unique blend of user friendly, cool gameplay and competitive nature (regardless of game mode) is a fixation for a large majority of the game’s<span class="read-more">more</span>
1d
Foo Zen-Wen

On 6 December 2022, Riot Games released the last patch of the year for Valorant, 5.12. Last patch before the end of the year—and it’ll be a long one (last until Patch 6.0 goes live in January). Check out what we’ve got going on in Patch 5.12 below. AGENT UPDATES With pro play heading into the offseason after the completion of an amazing Game Changers Championship, we’re taking the opportunity to hit some broad updates we’ve been looking to make<span class="read-more">more</span>
1d
Aidan van Vuuren

Starting off with a bang: VCT LOCK//IN 2023 to feature a Live audience on all days

With the Valorant Partnered teams set and the current VCT OFF//SEASON moving towards its second month, Valorant has announced the details of the upcoming VCT 2023 Kick-off tournament, VCT LOCK//IN 2023. The tournament will feature all the partnered teams from the Americas, EMEA and Pacific and will feature 30 teams. The tournament will kick off on 13th February and span 20 days, concluding on 4th March. Sao Paulo will host the event at Ginásio do Ibirapuera, Rua Abílio Soares, 1300,<span class="read-more">more</span>
1d
Ganesh Jadhav

New Look, New Feel: Best Valorant Skins to keep an eye out for

There comes a time in your Valorant journey when you are looking to spice things up. That sheriff just doesn’t hit as hard. That phantom is looking a little plain. Opinions and tastes are subjective, but thankfully, there is a bountiful parade of skins to liven up your inventory and gameplay. Of the exhaustive list, there are a few that stand above the rest, be it; VFX, finisher, or design. Here are the best bundles/skins in Valorant to date (subjective):<span class="read-more">more</span>
2d
Foo Zen-Wen

The content king Tarik “tarik” Celik has paired up with the Mogul Moves streamer Ludwig Ahgren for an early preview of things to come. The pair is already slated to host an OFF//SEASON tournament in January, but first, they had to iron out some of the kinks. Introducing the Lil Bro Cup, featuring 20 Valorant stars (pro players and content creators). Announced by Sentinels on the 29th of Nov, the tournament was sponsored by GrubHub and featured 20 Valorant Stars<span class="read-more">more</span>
2d
Foo Zen-Wen

Split is back: Valorant to bring Split back into the Active Map Pool

With Valorant entering its third, the game plans to bring about a wave of changes with the huge agent and game system changes with patch 5.12 to the change in the active map pool of Valorant. Valorant will enter the 2023 season with a bang. Valorant Episode Six will release on 11th/12th January 2023. It will bring forth a new map rotation, including adding a new map to the mix. The Valorant active map pool: With the addition of Pearl,<span class="read-more">more</span>
3d
Ganesh Jadhav